The Award along with a $100 prize was given to Gillespie by Juror Denise Cole, owner of the Cole Gallery in Edmonds, WA on Thursday evening at the Rosehill Community Center Art Gallery in Mukilteo.

At the awards ceremony, Cole praised the piece titled Kingdom Within for its intriguing design which she said caught her eye when she reviewed all pieces. Without knowing the names of the artists during the jurying, Cole chose three works by GJ Gillespie out of about 100 collages entered from across the state.

Collage Society officer and patron Gaye Jensen  congratulated GJ Gillespie for the honor at the reception.

Two of three chosen collage paintings will be on display at the Center -- a short walk from the ferry lines -- until September, 28 2014.


Also in the show:

"Punishment of Prometheus" (below) -- although accepted by the Northwest Collage Society -- was censored by Mukilteo officials who felt it was offensive. 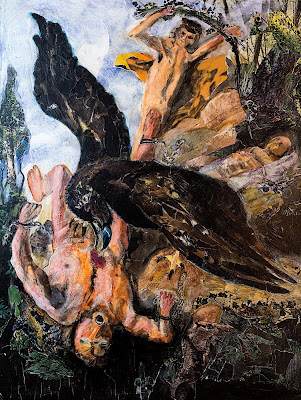 "Punishment of Prometheus" -- although accepted by the Northwest Collage Society for the summer 2014 exhibition --was censored by Mukilteo City officials who felt it was offensive. They did not permit the art piece to be on the walls of the Rosehill Community Center.

"Punishment of Prometheus" is based on a 1640 painting by master artist Jacob Jordaens.

About the Greek myth: Prometheus was a titan who stole fire from the gods and gave it to men. That made Zeus really mad, especially after Prometheus fooled Zeus with a fake sacrifice which turned out to be a clay mask on top of a sack of bones. Prometheus was punished for all eternity. He was chained to a rock on a far off island. Each day a huge eagle comes and eats his liver. Each night the liver grows back. Mercury the messenger god occasionally checks up on the punishment. Like the struggle of innovators trying to improve the human condition today, the Prometheus myth celebrates those who dare to defy convention.

You can own the painting banned by the City of Mukiteo for $380, including a beautiful mahogany frame and set with non-glare plexiglass.  (How many other people have banned artwork in their home or office?) Contact here.

The other two collages can be purchased at the Rosehill Center.

See other works by GJ Gillespie 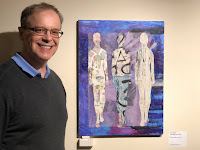