MORE about the art

ESSAY: FOREST BATHING WITH LEDA
Get Lost Sketching in the Woods by GJ Gillespie

WHOEVER SAID "stop and smell the roses" would appreciate the health craze called Forest Bathing.


"SMOKE ON THE WATER" SOLD
The day before the end of the 2017 Northwest Collage Society Winter Show one of two Gillespie pieces sold.

"It is a highest honor for an artist to see his artwork not only accepted into a public show but to sell," said Gillespie from his studio in Kirkland.

The other work entitled "Horse Latitudes" received one of five awards in the show of 55 works by local collage artists.

Special Merit Award in the Light Space and Time City Scape online competition. The collage was among 80 pieces selected out of 478 entries.

MERIT AWARD
GJ Gillespie's piece "Forever Young" was among 80 selected out of 760 entries for the Light Space and Time “Abstracts” 2015 Art Exhibition. See the work at 2:30 minutes into the video of winning art.  The Light Space Time gallery received 760 entries from 23 different countries from around the world. "Forever Young" was also invited for the Fiber Fusion Show September - April, 2016.

A piece by GJ Gillespie appeared in the 2015 May-June issue of the literary journal the Mid American Review (MAR).


Of the three GJ Gillespie submissions the judge for the contest chose "Life Cycle" to accompany a story about a young farming couple dealing with the death of a child.
MORE  here.

"Forget All Your Troubles" SOLD
Congratulations to a GJ Gillespie fan in Shelton for purchasing this collage inspired by people walking in the city.


“Art will remain the most astonishing activity of
mankind born out of struggle between wisdom and madness, between dream and reality in our mind”
Magdalena Abakanowicz
_____________________
About GJ Gillespie
The cultural and natural world of the American northwest inspires my art.

Living in a 1928 farmhouse overlooking Oak Harbor on Whidbey Island (north of Seattle) is an inspiring setting for an artist. The abstract expressionist masters who produced haunting images from this region are constant inspirations.

In addition to the mid century "Northwest Mystics", ethnographic designs of native peoples, cave painting, Greek myths and statues and cryptic letters figure into my art.

Most of my designs are inspired by art history.


The artists I admire tap unconscious feelings of longing for existential meaning that emerge from cultural icons. In my view, abstraction should be more than pleasing design. Instead, art should evoke connotations that permit the viewer to experience a sense of wonder, awe and new perspectives of being.

I enjoy experimenting with various media such as watercolor, collage, encaustic and mixed media on paper, canvas and board. I find that the translucent effect of layering watercolor adds depth and metaphorical meaning.

IDEAS for an abstract piece might appear in a dream. Inspiration also come by studying the works of the masters. Alfonso Ossorio, Arshile Gorky, Hans Hoffman and Lee Krasner influence me.

Following an atemporal style, I sometimes copy the works of old master painters, giving my own take by making them into collages.

In July 2014 I created a collage based on a 1640 painting by old master Jacob Jordaen of the myth of Prometheus. In the myth the gods severely punish Prometheus for giving fire to humans.

Between periods of art making I manage an international art supply company that sells my own brand of sketchbooks -- and other supplies -- that sell throughout North America, Europe and Japan.  Leda Arts Supply.

In July, 2017 Gillespie was invited to take part in the Ryan James Gallery Subscription Program.

PRICING
Larger pieces range from $800 to $340 (or best offer) and smaller pieces are around $100. Signed original art. Framing and shipping is available. Leda sketchbook with every purchase. Order canvas prints here

"To become truly immortal, a work of art must escape all human limits: logic and common sense will only interfere. But once these barriers are broken, it will enter the realms of childhood visions and dreams."
-- Giorgio de Chirico

Past Shows and Honors

"Punishment of Prometheus", a collage by GJ Gillespie -- although accepted by the Northwest Collage Society for a show in Mukilteo -- was rejected by Mukilteo officials who felt it is offensive. The city refused that it be on the walls of the Rosehill Community Center. See it here.

Larger pieces are $320 and smaller pieces are $120 unframed.
50 percent off any work for the month of April, 2017.
Contact here. Order reproductions.

Email ThisBlogThis!Share to TwitterShare to FacebookShare to Pinterest
Home 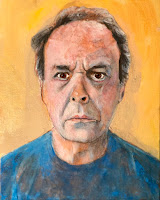